* (Disclaimer: This video content is intended for educational and informational purposes only) *

Thank goodness for police body cameras, now we don’t have to merely take the police officer’s word for what happened, we can see it with our own eyes. This protects the suspect, as well as the police officer, especially if there is an officer involved shooting.

Also, if the officer is white and the suspect is black, bodycam footage removes any speculation, especially if there is a race-hustling lawyer lurking around trying to make headlines for himself and ignite racial tensions between the police and the black community.

When you have bodycam footage, there is no doubt as to what occurred.

Chicago is already a hotspot for violence, especially with their idiot mayor Lori Lightfoot and her asinine policies hamstringing the cops. Also, right now Lightfoot is embroiled in a struggle with the police and other first responders right now over her vaccine mandate, which could lead to more police officers losing their jobs if they don’t bow-down to her demands. This of course won’t affect her, but it will have a terrible impact on the public if more cops lose their jobs because they refuse to get vaccinated.

One of the most dangerous calls that police respond to, is a domestic violence call, usually it involves a husband/boyfriend and a wife/girlfriend and the officers have no idea what they will encounter when the enter the residence. They do not know who (if anybody) will be armed, or not and most of the time when one individual is armed, police only have a few seconds to respond to the threat.

The incident below occurred in September and the bodycam footage was just released to the public just a couple of days ago.

Here is a written account of what transpires in the video below:

Police responded to a domestic incident at an apartment in Block 6500 on South Harvard Avenue after 11:00 am on September 19, 2021. Footage shows two officers entering the apartment Brown and his girlfriend shared, and questioning Brown’s girlfriend, who told police he had punched her several times after they got into a fight about laundry.

Brown’s girlfriend then told police Brown was in the back room of the apartment and had a knife. As the cop began to move towards the back room, he heard Brown yelling at them, and the cop returned from the apartment, pulling his gun.

After a while, Brown appears from the back room, holding a knife and waving to the cops, telling them to leave. Brown is obscured by a wall for a brief moment, and when he reemerges he doesn’t appear to be holding anything in his right hand, but his left hand is obscured, the video shows.

Brown slowly steps closer to the officers and appears to extend his right arm toward the door of the apartment to try to close it. An officer again tells him to put the knife down before firing three shots, striking him.

A knife appears to fall from his left hand, according to the video. A second officer begins several minutes of chest compressions. Brown was later pronounced dead.

Because the video contains graphic material, you will have to sign in to YouTube to verify your age before watching.

Congrats, Taxpayers, You Paid Half a Million $$ to Build a Fence Around Biden's Beach House

Thousands Of Migrants In A Brand New Caravan Are Forcing Their Way Through Mexico To The U.S. 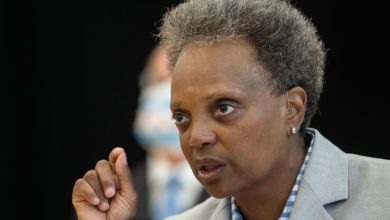 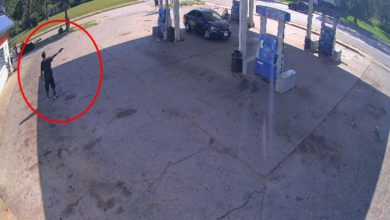 Kamala Staffers Say She’s Is A Mean, Morale-Destroying Bully As A Boss
6 hours ago