Before you watch the video below, you need to understand one thing, the thousands of people marching toward our southern border right now are not ‘asylum seekers’, they are an invaliding horde. They have no regard for our laws and they are being aided by none other than our so-called ‘president’ Joe Biden, it’s because of him they are coming.

These people have literally forced their way into Mexico and are hell bent for leather, headed directly at our border. We have NO IDEA who these people are, we do not know whether or not they are drug dealers, rapists, murderers, child molesters, gang members, or even islamic terrorists. All we know for sure, is that this just isn’t a bunch of folks just taking a casual stroll, this is an organized and concentrated attack on our nation’s sovereignty, they are invaders and must be stopped at all costs!!

So far this year alone there have been over 1.9 million (that’s million with an “M”) come across our border since Joe Biden took office, that’s a record and the Biden administration does not want you to know that. And none of these people are being screened for COVID-19 and the ones that are, are testing positive at an alarming rate and you can bet your bottom dollar that they aren’t being held in quarantine before Biden sends them off on their merry way to YOUR home town.

Joe Biden and his gang of socialists are putting American families in danger with this reckless immigration policy and don’t even get me started on the amount of fentanyl that is making it’s way into America, we are seeing record numbers of overdoses because of this.

Biden is placing all of these illegal aliens into mostly red states (but blue states as well) and is giving them all kinds of awesome freebies that YOU (the American taxpayer) are paying for, those freebies include: Housing, food, medical, cash and a ‘free’ education for their children. And you can bet that these illegal aliens will be voting in our upcoming elections next year, that’s why Biden is doing this, he is literally trying to change the voting demographic in this country , that’s the plan.

We cannot sustain this massive influx of migrants into our society, we simply cannot afford it and with this also comes a rise in crime, in our home towns and our large cities, the cops (the one’s that haven’t been fired because they refuse to get vaccinated) will be virtually overwhelmed and that means more Americans will die because of all this.

And what’s good ol’ Joe Biden doing about all of this…nothing, hell, he could care less. 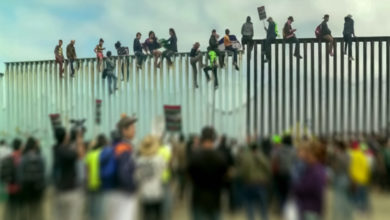 Biden’s New Budget Set to Give $10.5 Billion of Our Tax Dollars Directly to Illegal Aliens