It’s disgusting, I mean, if they were really honest about their policies they wouldn’t have to lie about it right? But, when your main task is to screw your own people, you kind of have to lie about what your real goals are. I mean, if you want total submission of the masses, you have to feed them some ridiculous story about it being for their own good right?

That way you can almost get away with anything, as long as you have the media on your side. And that’s just what is happening to our neighbors in the north.

Well, just like here in the USA, some Canadian citizens have had it with their own draconian lockdowns and vaccine mandates, which has also lead to empty store shelves and soaring inflation. Since I have spent quite a bit of time living in Canada back in the early 1980’s and early 1990’s, I saw first-hand just how our policies here in the U.S. affect our Canadian neighbors and just like us, they have had enough with a tyrannical government taking away their freedom.

They’ve had it so much, that thousands of Canadian truckers have driven across country to their capital, to protest these ridiculous vaccine mandates and policies. Just like us, they want the “right” to choose what they will, or will not, put into their bodies.

Canadian Prime Minister Justin Trudeau, said that this “freedom convoy”, is nothing but a “small fringe element”, of disgruntled people who don’t understand that all of these measures are for their own good, sounds familiar doesn’t it? Well, the Canadian people aren’t buying what their government and their own mainstream media is selling, they’ve had enough and just want things to go back to normal.

Dozens of big rigs rolled into downtown Ottawa Friday, as a planned protest began to swell in size and energy, and some in attendance promised to stay put until vaccine mandates are abolished, or Prime Minister Justin Trudeau is forced from office. But what some believe to be a demonstration in support of truckers opposed to a cross-border vaccine mandate is, in fact, a much broader push to end all COVID-19 restrictions.

Watch the video below and you’ll see just what it is that I’m talking about. It is imperative that we support our Canadian neighbors in their struggle, just like we must resist our own corrupt mainstream media and the Democrats right here at home that are doing the same thing.. 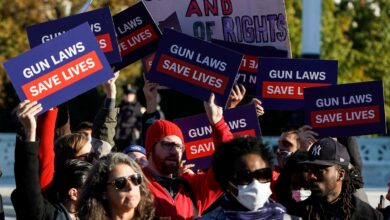