It must be nice to have such a cushy job that you can get over two months of paid paternity leave at. Most of us ‘regular folks’ don’t have that luxury, especially if you are an actual ‘woman’ who gives birth to another human being. But I digress, Pete Buttigieg is rather special, he’s a gay man who is ‘married’ to another man and they just adopted two brand new babies, I can see why something like that is headline news across the country. 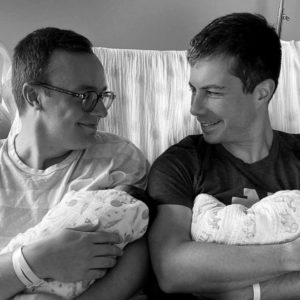 But getting back to that pesky little supply chain crisis, according to the Biden administration, Pete Buttigieg is more than qualified to run a massive federal organization. Just look at his qualifications, three years ago, the only people who ever heard of Pete Buttigieg were the residents of South Bend, Ind.,where he served as mayor of that happy little college town of about 100,000 people.

According to Joe Concha at Fox News:

South Bend, which will never be confused with Gotham, has a bus station with a fleet of 60 buses, no major railways, and fewer than 100 full-time transit employees.

So who better for Team Biden to nominate as Transportation Secretary than Mayor Pete? It’s only a sprawling government agency with 58,000 employees. To put that in perspective, that’s more than half the population of South Bend itself!

Suddenly, Buttigieg went from the management of $10 million to $85 billion – that’s billion with a B – overnight.

And now, nearly 10 months in, Buttigieg has his first crisis on his hands: A massive supply chain breakdown exploding across the country that will affect every American, particularly the low and middle class. Hundreds of ships wait off the coasts. They can’t unload their cargo.

And when that cargo finally reaches port, there aren’t enough workers and truckers to get the goods onto the trucks and out.

Yet all the media is talking about is Buttigieg becoming a new father. Just do a Google search and you’ll see what I mean.

Buttigieg, who made an appearance at the White House just a couple of days ago, also assures us that a task force has been set up to fix the problem. He also says he’s holding roundtables to solve the problem.

Ah yes…“task forces and round tables”, that’s swamp-talk for: “We have no friggin’ idea how to fix this, but, we’ll make it look like we’re doing something”.

Thank God, I was actually worried there, but since Mayor Pete is “on the job”, the rest of us can most certainly sleep better at night.

Remember those words of encouragement when you go to the grocery store to buy the necessities of life like; meat, eggs, milk, bread and peanut butter and you can’t find them because the shelves are bare.

But rest assured America, “Daddy Pete”, is working hard to fix the problem, that’s after he gets back from paternity leave and ‘playing house’ of course.