Okay, it was amusing when the Biden Administration named Rachel Levine (a man) as the United States assistant secretary for health, but this latest move is just plain crazy! 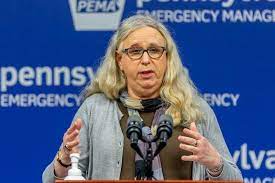 I’m just going to state the obvious here and I don’t give a damn what the “woke” mob thinks, this poor ‘man’ obviously suffers from gender dysphoria and I think he should be seeking professional medical help, but no, instead, Joe Biden and his pack of loonies named this “guy”, its first-ever “female four-star admiral”.

This move by the Biden administration is flat-out, ass-over-teakettle nuts!! I mean seriously, it’s bad enough that our allies don’t trust us anymore and as far as our enemies are concerned, they’re too busy laughing their butt’s off at us to take us seriously. But this insane move puts the icing on the cake for crazy stuff!!

In an article at The Western Journal they write:

The first-ever “female” four-star admiral in the public health corps is actually a man.

Yes, you heard that right.

In a statement released Tuesday, the Biden administration lauded the appointment of Rachel Levine to the aforementioned position, saying “Admiral Levine now serves as the highest ranking official in the USPHS Commissioned Corps and its first-ever female four-star admiral.”

This is the same group that claims to be the “party of science,” mind you.

The same party that is allowing men like Levine to take over women’s athletics and invade female-only spaces, all in the name of inclusivity.

How on earth can the United States be respected on the world stage when our government does this kind of stuff, I mean really. The democrats claim to be the “party of science”, but when you allow a man in a dress to become a “female” admiral, then all credibility goes right out the window.

Besides, I was under the impression that a four star Admiral had to be appointed by congress, NOT with just a flick of a pen. Also, Levine has NO BACKGROUND in the military, zilch, nada, zip, none!

I don’t know just how much more we can take from these morons, they aren’t picking people based on merit, but it seems as if it’s a contest as to who can be the nuttiest cabinet appointee.

Also, if they are naming a biological male as a ‘female Admiral’, I wonder, just how many actual females were far more qualified than Levine for this posting. The democrats claim to be all about helping women, but in reality, they are doing more harm than good to ‘real’ women.

It’s one thing to let a guy in a dress into the ladies room, but this, this is just plain nuts!

Penn. Teacher and NEA Board Member Wants Unvaxed with Religious Exemptions to Die
4 hours ago

Kamala Staffers Say She’s Is A Mean, Morale-Destroying Bully As A Boss
4 hours ago