Despite one mounting crisis after another, Joe Biden has spent more time on personal trips away from the White House than any modern president.

According to a review of the presidents and their away time from the White House, CNN has found that Biden tops them all — and not by just a little — in times spent away from Washington D.C.

A CNN analysis of Biden’s public schedule indicates the President has spent a significant amount of time away from the White House, particularly on weekends, since his January inauguration. Including this weekend’s trip to Delaware, Biden has taken 35 personal trips and spent all or part of 108 of his first 276 days in office at one of his Delaware homes or at Camp David in Maryland. That includes partial days, like Friday — when he spent the day at the White House and departed in the evening.

Sixty-nine of those 108 days away from Washington were spent at his home in Wilmington, spread over 23 visits; seven days at his Rehoboth Beach, Delaware, beach house over two visits; and 32 days at Camp David over 10 visits.

Biden has beaten Trump in his first year in office, too:

By comparison, Trump had spent all or part of 61 days at either his Mar-a-Lago or Bedminster properties in Florida and New Jersey, respectively, during the same period of time, plus all or part of nine days over four visits to Camp David. Trump also visited other Trump-branded properties, including his Virginia golf club and Trump Tower in New York, nearly 100 times at this point in his time in office.

At the same point in his presidency, then-President Barack Obama, who had school-age children during his term, had taken three vacation trips spanning all or part of 15 days, according to presidential record-keeper and CBS News veteran Mark Knoller, including a visit to his home of Chicago, a trip to Yellowstone National Park in Montana with his family and a weeklong escape to Martha’s Vineyard, Massachusetts. Obama had spent all or part of 25 days at Camp David over ten visits at this point, Knoller said. 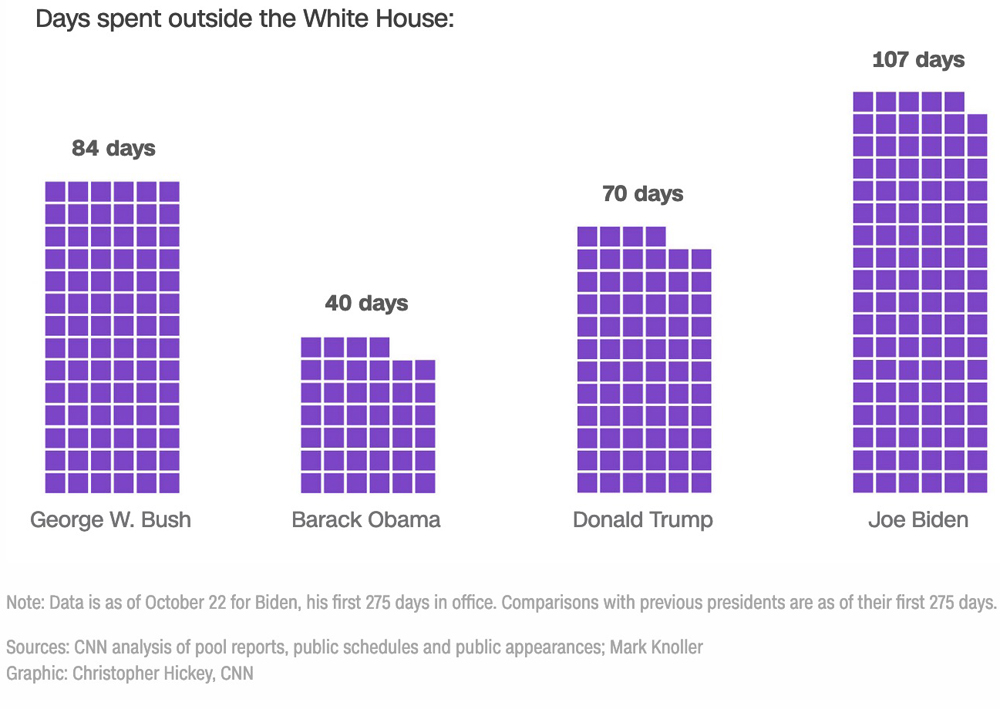 Let’s face it, though. The longer he stays away, the better.