If you think that the Democrats suddenly ‘care’ about your freedom, then you haven’t been paying attention for the last 2 years. When this pandemic first hit our shores, Donald Trump immediately blamed the Communist Chinese Government and as time went on, we saw that Trump was right.

But what did the Democrat’s in congress do, they called him and anybody who echoed his sentiment, xenophobic and racist. Then as the pandemic wore on, it was Democrat governors who decided to not only shut down the entire U.S. economy, they in effect, put the entire population under house arrest, calling it “self quarantine” to “slow the spread”. That was only supposed to last 2 weeks, and here we are over 2 years later.

Now, fast forward to today and all of a sudden and without any warning, those very same lockdown crazy democrats in congress and in the mainstream media want to lift all COVID-19 restrictions so that we can ‘go back to our regular lives’.

Well, they over-played their hand, because if you think people like Oregon Governor Kate Brown and California Governor Gavin Newsome and several other Democrat Governor’s across the country all of a sudden “care” about you by giving you your freedom back, then you would be either stupid, or you haven’t been paying attention the last 2 years.

There is only one reason they are all singing the same tune, these corrupt and power-hungry democrats know that with the midterm elections coming in November, they all stand a very good chance of losing their cushy jobs and THAT’S IT!! They think that by either easing, or doing away with altogether the COVID-19 restrictions that they put in place, that you will be somehow grateful and will forget all of the terrible things they have done to us for the last 2 years.

DO NOT LET THEM GET AWAY WITH THAT!!

They have made it abundantly clear that they really believe in their hearts, that you are stupid and will forget all of the crap they have pulled on us.

I have placed 2 videos in this article and I want you to watch them both. If you want to know the truth behind the Democrats’ sudden change of heart, then watch and see for yourself. People are done with all of this nonsense and have seen for themselves the hypocrisy of these vile people and we have simply had enough of their crap. 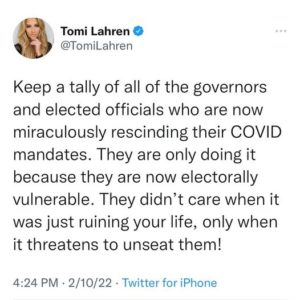 This video of Brittany Hughes is only 3 minutes long, but it’s powerful. Democrats have recently decided to change their tune on COVID, rolling back several mandatory mask policies and deciding the masking should optional. Leftists around the country are hailing these leaders as “leading the way back to normal.” Seriously?!? What the heck are these liberals smoking?

The video below is from the Dave Rubin Show and is only a few minutes long, but it is still very much worth your time to watch. You will see for yourself the hypocrisy of all of these key figures on display and remember, the only reason they’ve changed their tune, is because they think you are too stupid to remember all of the crap they have put us through in the last 2 years.

As an extra added bonus, I am including a link from Unwoke Narrative, that is a list of Democrat politicians and other so-called “elites”, breaking their own pandemic rules. To read that in it’s entirety, click HERE.

This Is A New Low Even For Democrats: Joe Biden Is Giving Out $30 Million In Free CRACK PIPES To Dope Fiends