As the crisis on the southern border continues to spiral out of control, the number of apprehensions of illegals has soared to the highest level ever recorded over the last year.

According to the left-wing Washington Post, “Historical data shows fiscal year 2021’s figure was the highest total ever recorded.” That is an update posted by the paper later after its first version of the story claimed that it was the highest since 1986, a claim that was 100% bogus.

“U.S. authorities detained more than 1.7 million migrants along the Mexico border during the 2021 fiscal year that ended in September, and arrests by the Border Patrol soared to the highest levels ever recorded, according to unpublished U.S. Customs and Border Protection data,” the paper wrote. 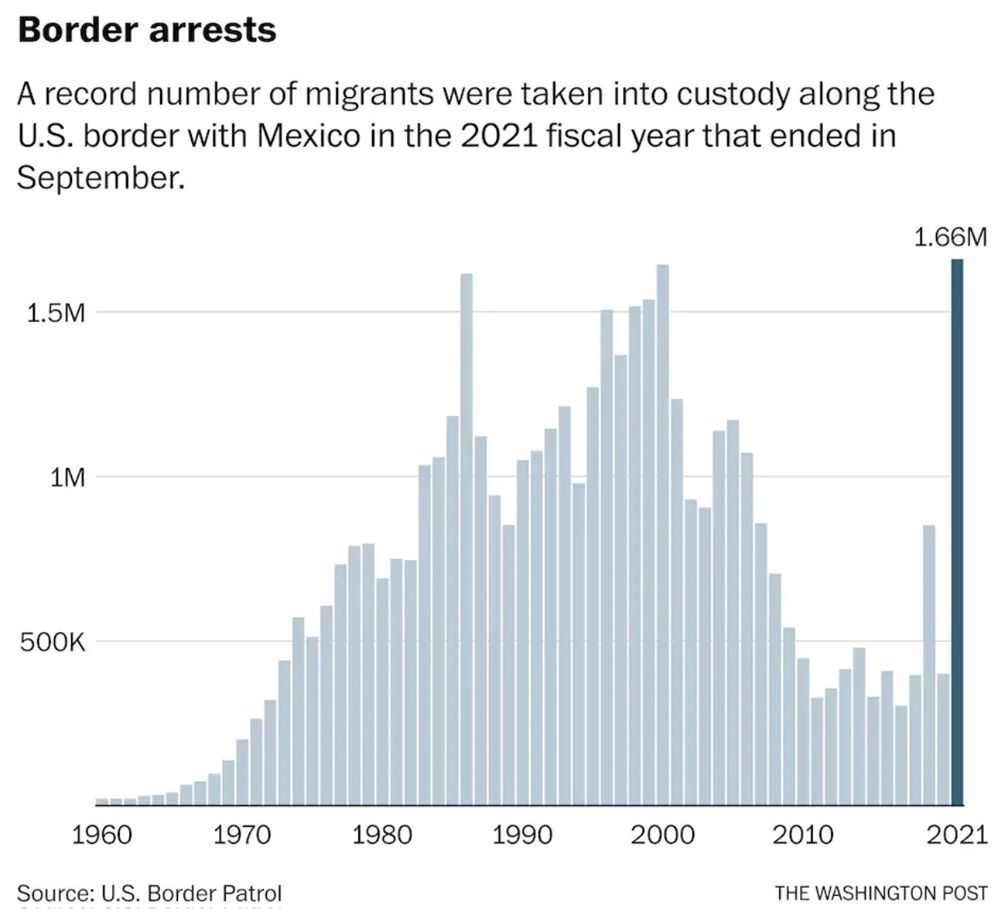 … and what are the causal agent during these three periods? In all three periods, the U.S. Congress began pushing for amnesty for illegals. And EACH time illegals flooded to the border in the millions with the expectation that they would get a free life paid for by U.S. taxpayers if they got here.

By the way, also note on that graph how low the numbers were during the Trump era!

Biden has passed off some serious lies about this avalanche of illegals.

“Illegal crossings began rising last year but skyrocketed in the months after President Biden took office. As CBP arrests increased this past spring, Biden described the rise as consistent with historic seasonal norms. But the busiest months came during the sweltering heat of July and August, when more than 200,000 migrants were taken into custody,” the paper noted.

But it is Biden’s dangerously failed policies that has caused this crisis. The paper added:

Once in office, Biden quickly halted construction on the border wall, ended the “Remain in Mexico” policy, reversed key asylum restrictions and announced a 100-day pause on most deportations and enforcement by U.S. Immigration and Customs Enforcement.

Biden officials initially blamed the previous administration’s policies for the increase in border crossings and said migration pressures intensified as a result of the pandemic’s economic fallout. Many migrants have told reporters they opted to make the risky journey north, at great cost and considerable danger, with the belief that Biden would allow them to stay. A tight U.S. labor market became another pull…

This is all Biden’s fault. His goal is no less than the utter destruction of this country.

This Is Something You Just Have To See: 12 Year Old Takes Cops On A Wild Chase Before Crashing Into Another Car